The details of that day are so vivid. They’re etched in my mind like deep grooves in glass.

The sun was beating down that day, sizzling hot to the touch of metal, of glass, of anything, in the way it does in South Carolina in July. I stopped for gas and filled up for the hour-long drive ahead. The stretch of I-20 between Florence and Columbia is straight, flat, boring. I broke my rule of never buying overpriced convenience store junk and grabbed a sickeningly sweet drink in one of those large glass bottles.

On the road, sun glinting off the windshield and heat waves dancing on the pavement, I slid Bon Jovi’s “Slippery When Wet” into the CD player. That CD player: man, that thing was the best ever. I was thankful to be driving the ’89 Camry my family had decided to give me after my granny passed away. Of course, it came equipped with just a radio and a cassette player. That summer I’d saved up for a Sony car unit and had some friends install it. I couldn’t get over how great it was, how ridiculously great it was, to be able to listen to my Dave Matthews Band and Aerosmith CDs whenever I wanted while drinking up the freedom of being in the first car that was truly mine.

I was wearing my brand new outfit, the one I’d just bought a few days earlier at American Eagle – distressed kkakis and a red short-sleeved henley-style shirt.  I’d bought it with the money I earned waiting tables that summer. I thought I looked so cool, so perfectly American Eagle, all laid-back casual and yet so put together.

In my red shirt, with my sunglasses on, I turned up Bon Jovi and sang at the top of my lungs…

About 20 minutes into the drive, I switched lanes from the right to the left in an attempt to pass a big rig. Suddenly, I felt too close to the truck, like I was being sucked into its airstream. I veered away and realized I’d turned the wheel too sharply. I veered again, this time toward the truck. I corrected and overcorrected a few times before opting for the tree-filled median over the menacing truck to my right.

The last thing I remember was driving into the median, the thick stand of trees before me, and knowing it was too late. There was nothing I could do. I was going to crash. 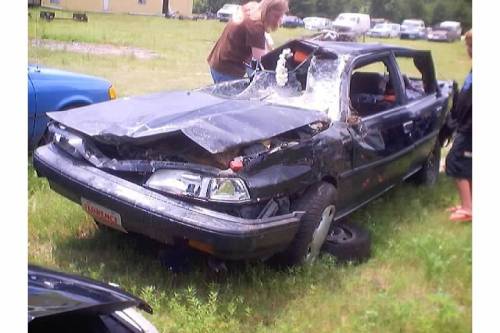 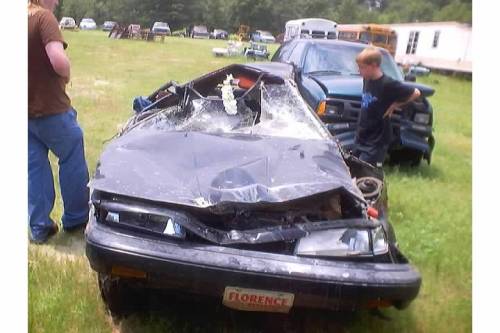 I have no recollection of striking the deep ditch that ran alongside the interstate and my car doing cartwheels.

I have no recollection of hitting the two trees that bore the marks of my car for months afterward.

I have no recollection of dangling upside down, blood dripping from my face.

I have no recollection of the fire that started to burn in the engine.

I have no recollection of my car being flipped over, made rightside up.

I have no recollection of my seat belt being sliced, and being pulled through the broken shards of glass lining the driver’s side window.

I came to, flat on my back, grass and dirt beneath me. Several people hovered above me, people I didn’t know. A strange lady gave me her little girl’s pillow to comfort me and whispered sweetly to me.

I was confused. Why was I on the ground? Why did my body ache? I couldn’t make sense of where I was or what was happening.

Then I was being lifted onto a stretcher and loaded into an ambulance. My head felt so fuzzy, so thick. In the ambulance, they asked me my name, how old I was. I managed to tell them. But I kept forgetting things. I asked them what happened, and they told me. A few minutes later I asked again. And again.

I was kept overnight at the hospital. Doctors examined me and performed a myriad of scans. I didn’t break a single bone. My body, my limbs, my brain were fine.

I’m not quite sure how or why I not only lived but made it out of that mangle of metal with mere scratches. But I look back now, 10 years later, and I’m so unbelievably grateful.

On a sunny, beautiful day singing Livin’ on a Prayer.

This entry was posted in Uncategorized and tagged car wreck, college, South Carolina. Bookmark the permalink.